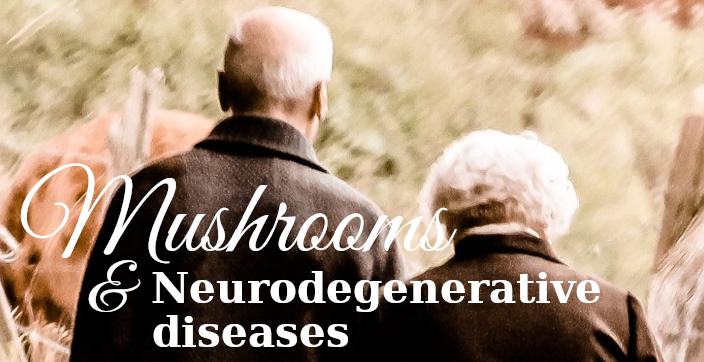 The effect of mushrooms on neurodegenerative diseases like Alzheimer’s, dementia and senilty.

Neurodegenerative diseases: Why the increase in numbers?

September is the month dedicated to Alzheimer’s syndrome, a disease that, piece by piece, destroy what makes us unique individuals by depriving us of our memories. Recently we find that Alzheimer’s disease is on the rise for several reasons: The first factor to affect the increase in statistical cases is – paradoxically – progress in the medical field. Medical advancements have in fact increased the average life expectancy in developed countries hence increasing the number of elderly people (the category which most subject to neurodegenerative diseases). Adding to the increase in average life expectancy, the effect of  medical and scientific progress has allowed an early diagnosis of the disease. Getting an early diagnosis of Alzheimer’s  an essential factor for reducing and controlling damage.

The latest data indicate 1.2 million people suffering from neurodegenerative diseases in Italy. About 600,000 of them have been diagnosed with Alzheimer’s. Worldwide data show that there are 50 million people in the world waiting for a definitive cure or treatment. It is estimated that by 2050 this number will triple. (source: Alzheimer’s Disease International)

Neurodegenerative diseases : What are the costs?

Such an increase in the numbers of people afflicted by neurodegenerative diseases has a heavy effect when it comes to economic and social cost parameters of each country’s health and social system. According to the Lancet Neurology periodic, countries worldwide face the economic cost of treating patients affected by dementia estimated in 600 billion dollars a year. The prognosticated growth rate of neurodegenerative  will bring up the costs by 85% in 2030 (increasing the economic expenditures for developing countries as well), making it become one of most significant component of the public debt with the greatest economic relevance for the national health systems and the social communities worldwide.

Neurodegenerative diseases : Scientific advancement – What is being done?

Scientific and clinical research on dementia is still seriously underfunded: in England, for example, it is estimated that the overall economic cost of caring for patients with dementia exceeds that for tumors and cardiovascular diseases put together, but the Dementia research receives only one-twelfth of the cancer funding (source).

Below is a translation of a a Japanese clinical study (Japan’s demographics are distinguished for low birth rates and high percentage of elderly population) of the Mushroom Laboratory – Hokuto Corporation, of Nagano concerning the effect of mushrooms on neurodegenerative diseases (research found here).

A double-blind placebo-controlled study was conducted on Japanese men and women aged 50 to 80 years of age diagnosed with mild cognitive impairment, with the aim of assessing the efficacy of the orally administered Hericium erinaceus mushroom (otherwise known as Lion’s Mane or Yamabushitake ). The results were were compared using a scale of cognitive function based on the Hasegawa’s dementia (Revised Hasegawa Dementia Scale).

30 participants were randomly assigned in two groups of 15 patients: one of whom was administered Hericium erinaceus mushroom while the other took a placebo. Subjects in the treatment group took 1 gram of Hericium erinaceus 3 times a day for 16 weeks. Following discontinuation of treatment, subjects were observed for the next 4 weeks.

In weeks 8, the group under Hericium erinaceus treatment showed significantly higher scores on the cognitive function scale compared to patients who took the placebo. The scores of the Hericium erinaceus group increased over time during the intake period, but 4 weeks after the 16 weeks of treatment the scores decreased. This indicates the lack of a permanent beneficial effect of the Lion’s Mane mushroom.

Laboratory tests showed no side effects. The results obtained in this study show that Hericium erinaceus is effective for improving mild cognitive impairment.

Mushroom and Neurodegenerative diseases: What can be learned from the clinical research?

To gain any substantial benefit from Hericium erinaeus / Lion’s Mane mushroom when handling cases of neurodegenerative diseases it is recommended to opt for Lion’s Mane extract or Body Fruit in capsules. Taking the mushroom in the form of capsules containing dehydrated mushrooms will help you maintain the daily constancy necessary for it to work, and unless a diet nearly exclusively based on mushrooms is your thing then dehydrated capsules are the way to go.